First of all guys, I would like to thank all who helped out the Under The Flesh comic kick starter project, as they successfully gained enough funds to print the first issue and begin on the second issue. Under The Flesh is a super hero horror comic for any of you guys who are unaware of it. 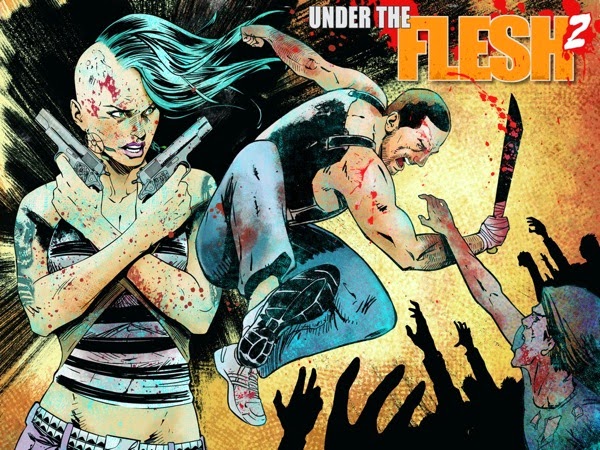 With less than 9 days remaining, the kick started campaign is sitting at just over 44% of funds achieved. I would like to encourage all of you horror fans out there to visit the Under The Flesh comic team's kick starter project and to provide some funds for the project! Again, the first issue was a success, so lets help out on the second issue because after all - it's horror!
For those who have forgotten about the plot, it is about an unknown virus that turns males into savaging cannibals. The protagonist contains hero like abilities, however he is unaware about anything he can or cannot do. In the second issue, there are more characters introduced to enhance the story line. It's the second issue now out of the six that will be produced, and it is highly recommended for those who like indie comics.
There is no more information released on the second issue so nothing is spoiled, however I have some links that you can check out for more information on the project!
Kickstarter - https://www.kickstarter.com/projects/363383187/under-the-flesh-ravaged-road-grindhouse-zombie-hor
Official Website - http://undertheflesh.com/
FaceBook - https://www.facebook.com/undertheflesh.comic
Twitter - https://twitter.com/Under_TheFlesh

With only 8 days remaining, I would like to ask all of you horror fans to provide this project with some support as it's pure horror! I'll be honest - I'm not the biggest comic fan ever but this does look really awesome, and the first issue did seem brilliant! Get it shared guys, the Under The Flesh team deserve all the support they can get.
Posted by Jason Egan at 07:15